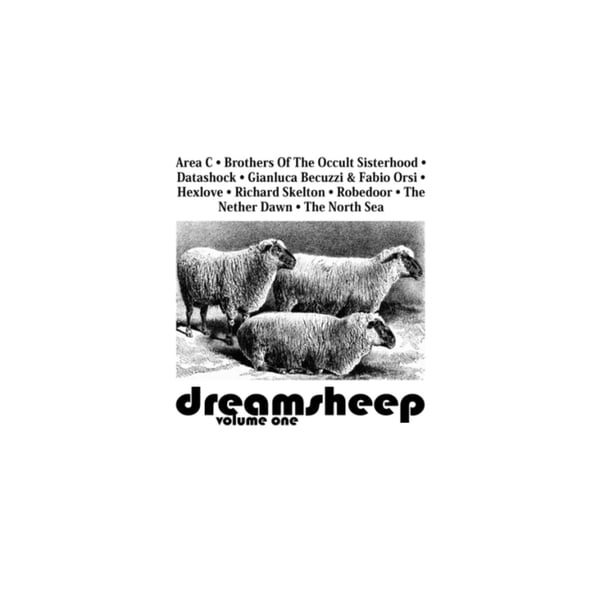 CDr OOP/sold out.
Try BOOMKAT.
Listen to it Spotify:


Notes
Sheeps on the front cover by A. Berghaus (19th century).
"Dreamsheep (Volume One)" has been compiled, tracklisted and mastered by Valerio Cosi.

First volume in a forthcoming serie of compilations. This one includes guys like Area C, Datashock, Gianluca Becuzzi & Fabio Orsi, Hexlove, Richard Skelton, Robedoor, The North Sea, The Nether Dawn, Brothers Of The Occult Sisterhood. It dives into drones and free-folk territories, offering some of the greatest tracks from the single artists. This compilation is a subtle journey into your mind, made of sound-and-vision ecstasy and monolithic tones. CDR comes in a limited edition of 200 copies.

Praise for the album:

"Putting compilation albums together is not as easy as any idealist wanting to create such a thing might hope or imagine. I was involved in making a compilation lp once (in the days of Boa Records, run by my friend Gayle and I) and, much as we were proud of the finished result, the process of getting all the material from those who expressed an interest in being included was far more laborious than it should’ve been.
The other drawback of many a comp is the attitude some people have towards what they supply for such releases: “oh, this isn’t good enough for my album, it’ll do for a compilation” is an approach that detracts from the albums and, I think, doesn’t reflect well on the artists either.
With those potential pitfalls in mind, I’m pleased to say that Dreamsheep Volume One comes through the minefield with flying colours. When I noted that it was on a label being run by Valerio Cosi, I hoped this would be the case, as he’s one of the most versatile and inspired musicians I’ve come across in the last few years.
Dreamsheep opens with Area C’s “Sorcery”, wheezy puffs of organ, overlaid with lilting slide guitar and chiming percussion: a beautiful way to begin. Datashock take the mood to more ominous terrain, with deep bowed strings and a misty building chorus of voices and drones before Richard Skelton (a.k.a. A Broken Consort) takes the texture back to a shimmering baroque sparseness. It hardly surprises me to find Gianluca Becuzzi and Fabio Orsi on an album compiled by Valerio Cosi and their multi-layered electroacoustic “At The End Of The Summer” proves that their inclusion is no “old pals act”! Robedoor are next, with sepulchral melodies in “bottom of the well” reverb flowing neatly into The North Sea’s fine burst of rumbling analogue synth overload, then the soundstage goes acoustic again with the strings, percussion and voices of Brothers of the Occult Sisterhood fading in and fading out as we eavesdrop on their spiritual improv session. Hexlove’s rhythmically complex “Instant Whole” runs backwards, forwards and, it seems, sideways simultaneously before The Nether Dawn complete the cycle with a lovely piece which seems to sit well with the Area C track in bookending the album.
One of the things I liked best about Dreamsheep is the way the running order flows. There isn’t a duff track on it and it’s a credit to all involved. 9/10 -- John Cavanagh (1 July, 2009)"
(FOXY DIGITALIS)